Tax avoidance is a major area of concern across the world. Rules framed by different countries to minimize avoidance of tax, in simple terms are named as GAAR.

Methods adopted to reduce tax liability can be broadly classified into four categories:

GAAR is a concept which empowers the revenue authorities to deny the tax benefits which do not have any commercial substance or consideration. There were conflicts between tax payers whenever revenue authorities question on such transactions. In a nutshell, GAAR is a set of rules which are based on general principles to check the potential avoidance of tax in general.

What are Tax Havens?

Tax havens are countries which have low tax regimes which provide individuals and business opportunities of tax avoidance or tax evasion. There are roughly 45 tax havens in the world today. In Indian context, Mauritius is considered to be the most significant tax havens or tax evading route.

The Mauritius route can be described as a channel used by individuals and MNC’s to evade paying taxes in India. The tax evasion in India through this route is estimated to be in tune with 55 billion dollar.

Implications of GAAR in India:

      Implementation of GAAR provides tremendous powers to deny tax benefit to an entity if a transaction has been carried with the sole intention of tax avoidance. Due to powers in the hand of taxmen, now innocents may be harassed by them.

–Here there is an arrangement and one of the main purposes is a tax benefit.

This is a case of tax mitigation where the tax payer is taking advantage of a fiscal incentive offered to him by submitting to the conditions and economic consequences of the provisions in the legislation. So this would not invoke GAAR.

–Here there is an arrangement and there is a tax benefit. The transaction lacks commercial substance and there is misuse of the tax provisions and thus revenue would invoke GAAR.

The content of this article is intended to provide a general guide to the subject matter. Specialist advice should be sought about your specific circumstances; Hope the information will assist you in your Professional endeavors. For query or help, contact:info@carajput.com or call at 9555555480 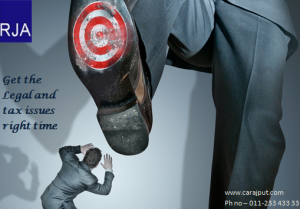 Measures to curb black money: In order to curb generation of black money by way of dealings in cash in immovable property transactions, section 269SS is proposed to be amended so as to provide that no person shall accept from any person, any loan or deposit or any sum of money, whether as advance or otherwise, in relation to transfer of an immovable property otherwise than by an account payee cheque or account payee bank draft or by electronic clearing system through a bank account, if the amount of such loan or deposit or such specified sum is twenty thousand rupees or more.

Similarly, section 269T also is proposed to be amended so as to provide that no person shall repay any loan or deposit made with it or any specified advance received by it in relation to transfer of an immovable property whether or not the transfer takes place, otherwise than by an account payee cheque or account payee bank draft or by electronic clearing system through a bank account, if the amount or aggregate amount of loans or deposits or specified advances is twenty thousand rupees or more.

AdditionalInvestments Allowance and provisions in respect of additional depreciation

A new section 32AD is proposed to be inserted to provide for an additional INVESTMENT allowance of an amount equal to 15% of the cost of new asset acquired and installed by an assessee, if—

(i) he sets up an undertaking or enterprise for manufacture or production of any article or thing on or after 1st April, 2015 in any notified backward areas in the State of Andhra Pradesh and the State of Telangana; and

(ii) the new assets are acquired and installed for the purposes of the said undertaking or enterprise during the period beginning from the 1st April, 2015 to 31st March, 2020.

This deduction shall be available over and above the existing deduction available under section 32AC of the Act.

The definition is proposed to be further amended to provide that the advancement of any other object of general public utility shall not be a charitable purpose, if it involves the carrying on of any activity in the nature of trade, commerce or business, or any activity of rendering any service in relation to any trade, commerce or business, for a cess or fee or any other consideration, irrespective of the nature of use or application, or retention, of the income from such activity, unless,-

(i) such activity is undertaken in the course of actual carrying out of such advancement of any other object of general public utility; and

Cost of acquisition in the hands of resulting company

There is no express provision under the Income-tax Act, with regard to value to be considered as cost of acquisition of a capital asset in the hands of resulting company on transfer of capital assets acquired on demerger. Accordingly, section 49 is proposed to be amended to provide that the cost of acquisition of an asset acquired by resulting company shall be the cost for which the demerged company acquired the capital asset as increased by the cost of improvement incurred by the demerged company.

Since the jurisprudence under the Income-tax Act is well evolved and a large number of provisions of the proposed DTC have already been included in the Income-tax Act, 1961 and the remaining are proposed to be included through the Finance Bill, 2015, the Government has expressed its resolve of not going ahead with the DTC.

It is proposed that mere presence of a fund manager in India would not constitute PE of the offshore funds, as this is resulting in adverse tax consequences currently.

In order to facilitate location of fund managers of off-shore funds in India a specific regime has been proposed in the Act in line with international best practices with the objective that, subject to fulfilment of certain conditions by the fund and the fund manager,-

(i) the tax liability in respect of income arising to the Fund from investment in India would be neutral to the fact as to whether the investment is made directly by the fund or through engagement of Fund manager located in India; and

(ii) that income of the fund from the investments outside India would not be taxable in India solely on the basis that the Fund management activity in respect of such investments have been undertaken through a fund manager located in India.

In the case of an eligible investment fund, the fund management activity carried out through an eligible fund manager acting on behalf of such fund shall not constitute business connection in India of the said fund.

It is proposed to reduce the rate of tax provided under section 115A on royalty and FTS payments made to non-residents from 25% to 10%.

Currently The Explanation 5 in section 9(1)(i) clarified that an asset or capital asset, being any share or interest in a company or entity registered or incorporated outside India shall be deemed to be situated in India if the share or interest derives, directly or indirectly, its value substantially from the assets located in India.

The share or interest of a foreign company or entity shall be deemed to derive its value substantially from the assets (whether tangible or intangible) located in India, if on the specified date, the value of Indian assets,-

Value of an asset shall mean the fair market value of such asset without reduction of liabilities, if any, in respect of the asset.

The specified date of valuation shall be the date on which the accounting period of the company or entity, as the case may be, ends preceding the date of transfer.

It is proposed to amend section 92BA by increasing the limit of specified domestic transactions entered into by the assessee from 5 Crores to 20 Crores rupees.

In the case of a non-resident, being a person engaged in the business of banking, the PE in India of such non-resident shall be obligated to deduct tax at source on any interest payable to either the head office or any other branch or PE, etc. of the non-resident outside India. Further, non-deduction would result in disallowance of interest claimed as expenditure by the PE and may also attract levy of interest and penalty in accordance with relevant provisions of the Act.

(i) it is an Indian company; or

(ii) Its place of effective management, at any time in that year, is in India. (Earlier the provision was – during that year, the control and management of its affairs is situated wholly in India)

The content of this article is intended to provide a general guide to the subject matter. Specialist advice should be sought about your specific circumstances; Hope the information will assist you in your Professional endeavours. For query or help, contact:   info@carajput.com or call at 011-23343333